Sheryl were the dots, sister Donna was the dash. The girls hit the local talent circuit, as well as Elks, Lions, Moose and other fraternal animals. When her voice showed itself to be an operatic dramatic soprano, Shirley dropped the punctuation and sang solo at Catholic University, Merkin Concert Hall, eventually Carnegie Hall, The Apollo Theatre and The Historic Landmarked  Cherry GroveTheatre. 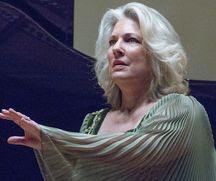 Shirley’s rich life experiences (she was a dealer in Vegas, an opera singer in Graz, and a singing bartender in Greenwich Village) influence the Life and Love themes of her shows, moving audiences to laughter and tears.  A true crossover artist, Shirley is at home singing from the Great American Songbook as well as art songs and arias.

Her debut CD, Both Sides Now, was released in 2010. Arranged by Christopher Marlowe

New Single, When She Love me, was released in 2018 Arranged by Rick Jensen

Christopher Marlowe, born in a trunk in Washington, D.C., was the recipient of the 1996 Manhattan Association of Cabaret’s Award for Music Director of the Year. Until her untimely death in 1995, Chris was principally associated with singer Nancy LaMott.

Chris conducted, arranged and recorded with Kathie Lee Gifford, worked on a pre-Broadway one woman show with Bernadette Peters, music directed David Zippel's All Girl Band at Joe's Pub and " It's Better With a Band"  at The Prince Music Theater in Philadelphia.

In 2013, Christopher music directed and played for Elaine Paige’s first US concert tour, and music directed “ Marvin Hamlisch: They’re Playing His Songs”  at the Cape Playhouse in Dennis, Massachusetts. and the McCallum Theater in Palm Desert, California.

He has performed on Good Morning America, The Today show, Live with Regis and Kathie Lee, The View, The Rosie O'Donnell Show, Late Night With David Letterman, American Idol, Carnegie Hall and twice at the Clinton White House.